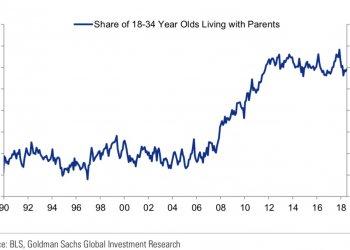 John Kenel: Parents in the US can’t get rid of their kids!

The share of 18-34 year olds in the US living with their parents is the highest it has been in 75 years.

The share of young people who don’t leave the nest has steadily increased in recent decades, and accelerated after the 2008 financial crisis.  Across education levels, race, gender and region, no ground has been immune from the trend, according to a report by the Pew Research Center.

Pew’s researchers think late twenty-somethings are boomeranging back home because, in contrast to previous generations at this stage of their lives, they are less likely to have a well-paying job and less likely to be married.  It turns out that no job and no partner makes living with your parents a lot more appealing.