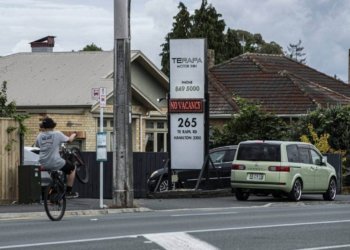 Emergency Housing was created by this government

Emergency housing barely existed before Jacinda’s government rose to power. In the last year, the Hardship Fund, from which social support including emergency accommodation grants and accommodation supplements are drawn, spent nearly $535m – over $200m more than the previous year. Much of this money is being paid to motel operators.

The rising cost is a direct result of changes to government legislation regarding landlords. As I’ve been saying for years now, this government has the sequence wrong. They need to build the social housing before they stop private housing providers from providing housing. They are doing the opposite. They are pushing private property owners out of the market and pushing children into motels.

Before Jacinda’s government we didn’t have people living in motels. Another thing you didn’t see was Kaianga Ora housing with multiple tin sheds strewn across their section with children living in them (outside rooms, with no bathrooms, and I bet not warm and dry – but then KO doesn’t have to comply with Healthy Homes legislation). You didn’t see entire streets of motels filled with families, with young kids, in horrible overcrowded, unsafe and unacceptable conditions.

This is what happens when you let your ideologies get in the way of simple, practical thinking. New Zealand needs private individuals to provide rental housing, that’s a fact. And yes, we probably need more social housing for the growing number of people who can’t take care of themselves. But you have to build the social housing before people can live in it. Jacinda’s government has to stop attacking private home owners who choose to rent their houses to tenants. They are offering a very important service and one that’s very hard for government to replicate, at least any time soon. Government should be working with private landlords, encouraging them to to build even more new housing, but again they are doing the opposite.

I have land that I was going to build long term rental housing on for my own account. I could start building right away. But I’ve put the plans on hold. Why? Because I don’t know what a new build is under the new rushed anti-landlord legislation. Government has not provided any information on what a new build is. What they have said is that you’ll still be able to claim interest on new builds. But what is a new build? Is it a house bought off the plans? Is it a house that has had code of compliance within the last 3 years? 5 years? 10 years? How long can you claim the interest for on a new build? 1 year? 5 years? As long as there are no details, I cannot commit capital to building new housing. And I’m not alone. A lot of developers and investors are sitting on their hands right now waiting to see what Jacinda will come up with next.

In the meantime, children and vulnerable adults will be living in sub-standard conditions thanks to this government’s decisions. Like the 9 year old girl who I saw come out of what is no doubt a cold, damp little shed on a Kainga Ora property next to one of my rentals a few days ago. She has to walk through the cold and rain to get inside to use the bathroom, she’s not even living in a house. She had a school uniform on. It made me think of my own daughter and the very different way in which she starts her day.

This is not fair. It’s not fair that Jacinda is so focussed on trying to stop some New Zealanders from saving for their retirement through property, that she’s prepared to make children live in these conditions. What did that little girl do to deserve camping instead of living in a house?

It’s not OK and was completely avoidable. This government is directly responsible for the ‘emergency housing’ situation. They made it too risky for landlords to house anyone without a perfect record. Landlords can’t afford to give someone a chance as it’s so hard to get them out. Fixed term doesn’t mean fixed term any more so some people are keeping houses empty rather than renting out for a few months, along with many other unintended effects.

Where did they think those people would go when private landlords turned them away? People can’t live in housing that hasn’t been built yet.

Why are people not talking about this? Why is it OK to make children live in motels and sheds? Do we really not care what this government is doing to those most in need?

No, we don’t need an urgent fix for the housing market, we...

Property: Your friend in inflationary times

Historically, both property and equities have proven to appreciate faster than inflation....

“We expect the Golden Triangle’s dominance as New Zealand’s economic powerhouse to...